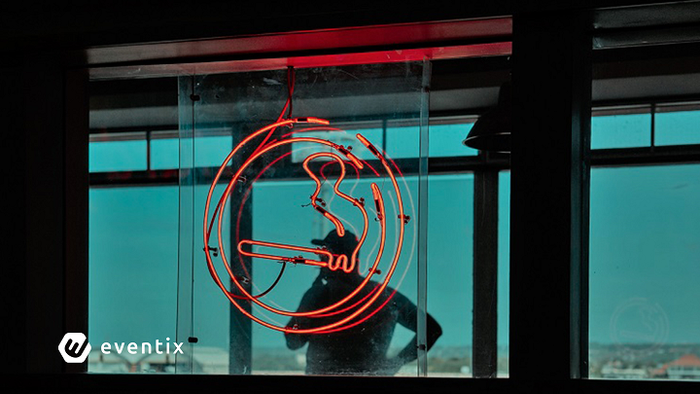 So what's next, now that smoking rooms have been banned?

On the 27th of September, the High Council of the Netherlands (you could call it the Dutch Supreme Court) reached a verdict on the case between Clean Air Nederland (CAN) and the Dutch State. Smoking rooms have been permanently banned. Exactly what consequences the ban will have on the catering and events industries is still up in the air, despite that, we still go looking for answers.

Eleven years ago a general smoking ban went into effect for the hospitality industry, which meant that smokers no longer had free rein over Dutch nightlife. After the ban took place, smokers needed to go outside, or into one of the specially-built and expensive smoking rooms. Nowadays, everyone who goes out is familiar with the phenomenon of the smoking area; a heavily ventilated room that is often filled to the brim with people puffing away at their cigarettes. Alas, no more.

In 2015, Clean Air Nederland (CAN) took the Dutch State to court for permitting bars and restaurants to have smoking areas. After the Dutch State appealed to the High Council, the court ruled in favour of CAN. The Supreme Court’s verdict has confirmed that the smoking areas were in conflict with the agreements made with the World Health Organization (WHO) in the WHO Framework Convention on Tobacco Control (FCTC).

This is bad news for many hospitality entrepreneurs; clubs, discos and music venues will now have to deal with smokers who’ll want to go outside during an event. This will lead to an altogether new problem: More people loitering on the street means more nuisance for the neighbourhood. What’s more, many of these establishments will have invested thousands of euros in building top-notch smoking areas which will now have to be repurposed and possibly renovated. WesterUnie, a club in Amsterdam, was apparently frustrated enough with the decision to post the following message on Facebook (to be taken with a grain of salt): 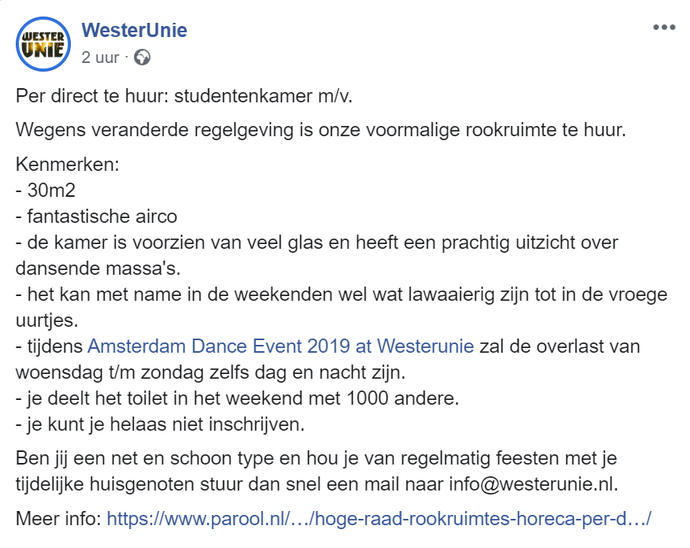 Translation:
"For rent as of now: student room for male or female

Due to a change in legislation, our former smoking room is up for rent.

If you are a tidy and clean type who likes to party regularly with your temporary roommates, then quickly send an email to info@westerunie.nl."

So what now? What are these bars, music venues, discos and clubs going to do now that their smoking rooms have been closed? Actually turning them into student rooms isn’t an option, so what is?

Luckily the law isn’t being enforced yet! Paul Blokhuis, the Secretary of State, has decided to wait until the 1st of April 2020 to put the enforcement of the ban on smoking rooms into motion. We suspect it’s no joke. He hopes this period will provide hospitality entrepreneurs with plenty of time “to make the necessary changes and to come to agreements with the municipality about the possible nuisance caused by smokers on the streets.” They also want to use that time to inform hospitality entrepreneurs about what exactly the ban will mean for them. How are they going to that? With a flyer.

One of the groups that have lobbied to keep the smoking rooms open is Koninklijke Horeca Nederland or KHN (Royal Dutch Hospitality). Even after the High Council’s verdict, the KHN pleaded with Blokhuis to hold off on enforcing the law so that small businesses would have the chance to take measures together with their neighbourhoods and municipalities. Robèr Willemsen, chairman of the KHN: “It’s still a bitter pill to swallow that smoking rooms will need to close sooner than the 1st of July, 2022, which is what we originally agreed upon. But, we’re satisfied that the Secretary of State has heeded our call to hold off on enforcement until after the 1st of April, 2020.”

Of course, this isn’t only frustrating for the smokers themselves. A survey by Misset Horeca (in Dutch) has shown that many hospitality entrepreneurs are fearful for the continued existence of their establishments after the ban. So, clubs and bars are scared! On the one hand, they’re afraid that having more smokers on the streets will lead to serious conflict with their surrounding neighbours, and on the other hand, they’re afraid they could be facing a considerable loss in revenue. If smoking isn’t facilitated in some way, fewer people might hit the town for a rowdy evening and being too harsh on smokers to keep the neighbourhood happy could inadvertently lead to them staying at home as well.

But not everyone is as pessimistic about the situation. Tim Gaal, director of Grenswerk - a pop venue in Venlo - pointed out a few benefits: ‘We’re seeing that quite a few people are constantly walking heading to and fro the smoking room, which means that even on busy evenings the concert hall can seem a little empty.” He hopes the ban on smoking rooms will make people stay where the music is. “Going outside is an extra step, especially in the winter, when you’ll constantly putting your coat on and then taking it off again.”

However, the ban doesn’t exactly sit well with him: “I have mixed feelings about it; it’s not very rock and roll to ban smoking, but on the other hand they’re doing it with a healthier society in mind.” He doesn’t believe that the ban will lead to smokers staying at home: “As a music lover that’s at odds with who I am, I don’t really believe in that.” However, Grenswerk’s smoking room will stay open until the 1st of April as well.

The end need not necessarily be nigh, not for smokers, nor for the places where they like to go out. At the end of the day, people are bound to adapt, whether they like it or not. But what if the ban goes a step further?

If it were up to Tom Voeten of CAN, there’ll be a time when smoking is banned in entire areas of the city centre: “The big advantage to the hospitality industry is that the responsibility to check and enforce the law will fall to the government rather than business owners.” A policy like this would clearly pose a huge problem to smokers, but for hospitality businesses, it could work both ways: It could save a lot of hassle with the neighbourhood, but there would be a greater chance that smokers might stay home. In reality, what would probably happen is that smokers would to go diving into alleys, left and right - like some might do to take a quick pee on a night out - to get their fix before heading back inside. All this while hoping not to be caught by the patrolling anti-smoking police. But would you like it if your tax money was being spent on hunting down smokers in a smoke-free area? It reminds me of smoking behind the gym during lunch break at high school, while the supervisors marched around the schoolyard looking for us.

And you know what, it is a bitter pill to swallow. Just having a quick cigarette has become a whole song and dance, and I feel a little bad for the smokers among us. I don’t smoke myself, at least not for a long time; I shook off the habit years ago. Not smoking saves you a fortune, and of course, it’s a lot healthier - although I really couldn’t care less about the latter. The old romantic image of the smoker has pretty much been driven out of society. You might still see a flicker of the cool smoker in some movies and TV shows though. I recently saw Joker and that guy was puffing his lungs out, but there was no charm to it. His smoking didn’t make him seem tough, instead, he just seemed sad, weak and addicted. I suppose smoking just isn’t cool anymore - secretly I still think it does have its allure though, but perhaps I’m a bit of a dying breed.

Thanks for reading! If you have any questions or feedback related to the blog feel free to contact us through the chat in the bottom-right of the screen.

Would you like to discover the power of our ticket sales system and start selling tickets right away? Go to the 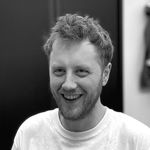 Once took a peek behind the scenes at events and never wanted to leave again. Has a serious passion for music and plays guitar in his band.